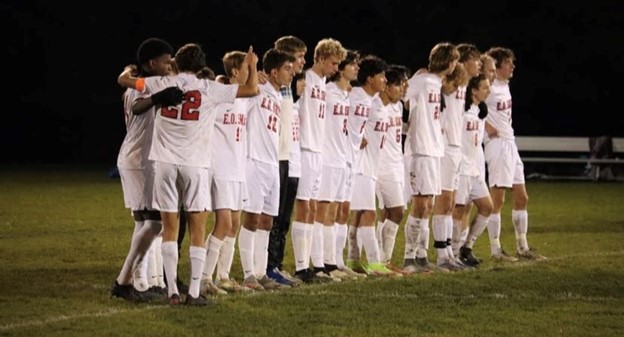 Boys Soccer Battles to the End

The E.O. Smith boys soccer season unfortunately came to an end with a tough 3-1 loss to the second-seeded Watertown Warriors in the Class L state quarterfinals. However, the ending to this Panthers season is not a true reflection of the success this team accomplished in the 2021 campaign.

The coach Mike Radlbeck-led squad started slow, beginning with a record of 1-3-1.  Eventually, the Panthers found their groove and didn’t lose again for another five games. They finished the season with an overall record of 7-5-4 and a conference record of 4-1-2, which was enough to win the CCC East!

“We had a slow start, but we picked up at the end,’’ junior goalie Garrett Ballou said. “In the end during our playoff run, we were really peaking right there. It definitely was a hard loss because it felt like we were peaking.”

The Panthers traveled down to Bethel to play the 10th seeded Wildcats in the first round of the Class L state tournament. Even with all odds stacked against them, the Panthers were able to upset Bethel 3-2 with a required round of penalty kicks. Senior captain Nick Simpson opened the scoring before Bethel tied it up to send the game to extra time. In penalty kicks, the goals came from seniors Nick Simpson, Cayden Boukus, and Jake Bernstein. Ballou was phenomenal in the penalty kicks, making two difficult saves.

“The seniors were excellent. They knew what they were doing. They had a great mindset. They did not get down on anyone. They helped everyone out.””

In the second round, E.O. Smith took on the seventh-seeded New London, coming away with another upset win – this time winning 4-0. Goals were scored by Jake Bernstein, junior Thad Hempel (2), and sophomore Alessio Casa. Junior Griffin Stacey added two assists, and Ballou had another strong performance in net making five saves.

Though it was not the ending the Panthers squad sought, they still have many reasons to be proud. Despite being the 23rd-seeded team in Class L, they were able to make it all the way to the quarterfinals, and they won their regular season conference after a sluggish start to the season.

Congratulations to seniors Bernstein (captain), Cayden Boukus (captain), Diego Caballero, Brendan Raynor (captain), Simpson (captain), and Jake Stavens on their successful careers with E.O. Smith soccer, and good luck to them in their future endeavors. They will be missed. “The seniors were excellent,’’ Ballou said. “They knew what they were doing. They had a great mindset. They did not get down on anyone. They helped everyone out.”

And for the rest of the squad, the 2022 season can’t come soon enough!

PLEASE READ OUR COMMENTS POLICY The Panther Press intends for this area to be used to foster healthy, thought-provoking discussion and to commend those for their work on the site or those whose exploits are profiled on our site. Comments are expected to adhere to our standards and to be respectful and constructive. As such, we do not permit the use of profanity, foul language, personal attacks, or the use of language that might be interpreted as libelous. This is not a place for inside jokes or coded messages to friends; students are working diligently to create this site, and we ask that you respect that effort. Comments are reviewed and must be approved by a moderator to ensure that they meet these standards. All decisions of the moderator are final. The Panther Press does not allow anonymous comments, and The Panther Press requires a valid email address. The email address will not be displayed but will be used to confirm your comments. Contact Mr. Kennedy at [email protected] for assistance.
All Panther Press Picks Reader Picks Sort: Newest